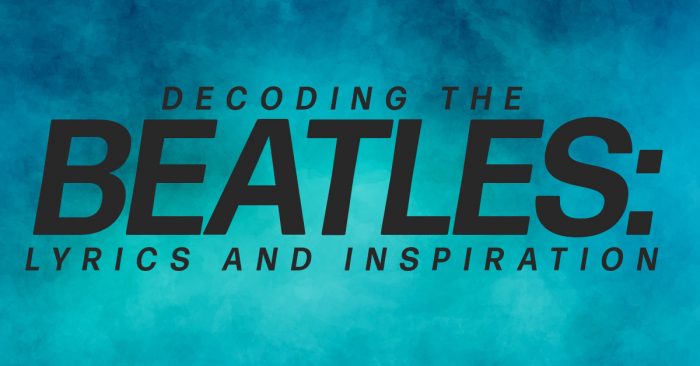 The Beatles were together for less than a decade, but in that time produced a lifetime of music. While some of it was straightforward, some was complex and perplexing. Here is a look at some songs of the Beatles and the inspiration and meaning behind them.

While John and Paul were frequently at odds, when John left his wife and son’s mother for Yoko Ono, Paul wrote a song to comfort John’s son, Julian. The song was original called “Hey Jules” but was later changed to “Hey Jude”.

“She Came in Through the Bathroom Window” and “Polythene Pam”

These songs were both inspired by fans of the Beatles. One tried to enter Paul’s home by using a ladder to enter his second floor bathroom. Pam was inspired by an early fan of the group who often attended shows at The Cavern. She was known to the band for her almost non-stop snacking from plastic bags.

This highly produced song, backed with a 41-piece orchestra, was a tribute to Tara Browne, who was an heir to the Guinness beer fortune, but died in a tragic car crash. Tara was friends with many rock stars at the time. Some speculated Browne had taken LSD prior to his death.

“For the Benefit of Mr. Kite”

Central to the circus/carnival theme of the “Sgt. Pepper’s Lonely Hearts Club Band” album on which it appeared, this song was inspired by an actual circus poster. John had acquired the poster, originally printed in 1843, detailing the talents and feats of Pablo Fanque’s Circus Royal and its appearance in Lancashire, England.

“I Want to Hold Your Hand”

No mystery here. This is a song about holding hands.

In just eight years, the Beatles had 20 number one hits and some 34 top ten hits. Their core catalog of 23 albums contained 213 songs. The band even was involved in five movies, including A Hard Day’s Night, Help!, Magical Mystery Tour, Yellow Submarine and Let it Be.

Many forget that John, Paul, George and Ringo went on to varying degrees of success following their breakup in 1970. John’s legacy includes “Imagine”, “Instant Karma” and more. George’s biggest hit as a solo artist was “My Sweet Lord” and Ringo gave us “Photograph” and “It Don’t Come Easy”. It is Paul, however, who has had the most success with Wings and a long list of solo hits.

Should You Own a Collectible Car?

Why Do We Say That?

Five Things Even Small Businesses Should Have

What To Know Before Answering the Question “Can I Borrow Your Car?”

Whatever Happened to the “Starter Home”?

Breakfasts Across the Globe