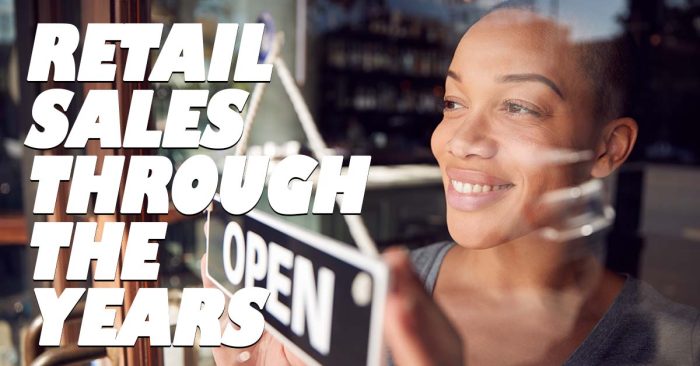 When we pick up our smartphones and order something online today, we don’t give it much thought. We just expect our purchase to be at our front door in a day or two. There was a time, however, even within the last 100 years, it was much different. Since the advent of department stores, retail stores have evolved with the times, technology and society. Let’s take a quick look back on how retail sales have changed through the years.

Some believe the concept of department stores started in England in the late 1700s. Others point to Bon Marche in Paris as the first true department store. These large urban-based retail establishments were created to serve a growing city populations in the industrialized age. It allowed shoppers to do all there shopping in one store, in different “departments”. These included housewares, clothing, shoes, appliances and so on. Many department stores added restaurants, so hungry shoppers wouldn’t leave. Early major department stores included Gimbels, Montgomery Ward, Macy’s, Wanamaker’s and more.

The first “Sears” catalog was printed in 1888 but just featured watches and jewelry. By 1893 they became the Sears Roebuck & Company and the catalogs became increasingly larger and more popular. Children across America would use the catalog to circle items for their Christmas wish list. Soon, the catalog featured just about everything you could imagine, even including kits to build an entire home! Other retail companies like JC Penney and Montgomery Ward followed with their own catalogs, but none could match the giant Sears catalog.

Like today’s dollar stores, the early 1900s saw the increase in popularity of the “five and dime” stores, where consumers could purchase inexpensive items quickly. While many five and dimes were independently owned, large chains like F.W. Woolworth and Kresge got into the market. Many of these stores included diners or lunch counters where shoppers could grab a burger, BLT hot dog and malted milk.

The 1960s and 1970s were the heyday of the suburban mall. These “shopping cities” contain multiple stores under one roof. Malls included fountains, play areas and food courts. Many still remain in business today.

Discount stores are free-standing retail stores, that like department stores, sell a variety of merchandise. You may have heard of one of them…Walmart.

Of course today, online purchasing dominates the retail landscape, with giant Amazon leading the way. Now if they could just figure out a way to include a burger and malt with your purchase.